Just back from a trip to Florida and a few days in Puerto Rico.  The tropical warmth and sunny weather were fantastic.  While in southern Florida for six days, I was amazed at the ease of photographing wildlife.  Before I reached the highway when leaving the airport in Fort Myers, I had already seen turkey vultures and two deer.  And it just got better.  From the man-made pond in our friends’ back yard, to the Venice waterfront, Ding Darling wildlife refuge and the beach at Sanibel, and a couple of state parks, the images of birds, reptiles, insects and dolphins just kept coming.  It makes working on wildlife photography here on Cape Cod feel very frustrating!

To see the rest of my Florida wildlife photos, click here-  http://preuphoto.photoshelter.com/gallery/Florida-Wildlife/G0000HTTvDZNG4jk

It’s a rare 60 degree day, this the seventh day of January on Cape Cod.  It feels like spring, not just to us, but to the honey bees as well.  Fortunately for a nearby hive, a large heath in my yard is in early full bloom.

I came upon this hawk purely by chance.  While backing-up my truck,  I saw something with my peripheral vision.  Most people would have missed it, but I am always distracted by the unexpected.  When seeing something like this, I am reminded how glad I am to be at the top of the local food chain, and not looking over my shoulder like a squirrel!

After the hawk was finished, there was little more than a pile of feathers…

Even though my main area of interest is photographing the natural beauty of Cape Cod, I always bring my camera.  I have a new gallery on my website in which I will post some of my favorite images from the rest of my world.  http://preuphoto.photoshelter.com/gallery/Other-Places/G0000bClIw_Ri59s

Hoppy Easter from the Easter Bunny!

Just like the more famous salmon runs, river herring return to their birth ponds to breed.  Spending most of their lives in salt water, they are drawn back up fresh water streams starting in March.  At first only a few, called scouts show up.  Soon they are joined by more and more, until the pools where they rest before continuing upstream are jammed, fish against fish, circling. 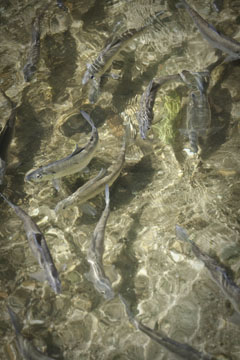 Diane and I have a tradition of walking on Nauset beach every Christmas Day afternoon.  Being a photographer, I always carry at least some of my gear.  Christmas 2003 I created two of my best selling images, both with my new 3 megapixel point and shoot.  That was a defining moment in my photography.  Shortly after, I purchased a Canon Rebel digital SLR, and I haven’t used film since.

This Christmas, we again walked Nauset, heading toward the remains of a schooner that a nor’easter had washed up the previous month.  I had photographed the piece a few days after the storm when it was still at the edge of the surf.  A month later, it was now high on the beach and rolled over, exposing the ribs, pegs and planking.

On this second day of the new year I want to wish everyone  a happy, healthy, and prosperous  2011!

An immature herring gull attepted to eat this whelk on teh shore of Pleasant Bay in Harwich.  After being unable to get into the shell, it lost interest and moved on to a dead crab.  I took the opportunity to create a few images of the whelk before returning it to the relative safety of the water.

The apparent atttitude of this immature common tern was reminiscent of the famous “Mad Bluebird” photograph.  It was part of a group of terns I found on the shore of Round Cove in Harwich. 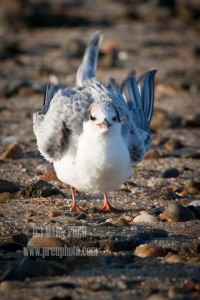 It’s the end of summer, and the tropics are active.  In the past week two storms passed by.  Tropical storm Danielle kicked up some beautiful ocean swell while staying far at sea.  Hurricane Earl had us scurrying to prepare, but ended up only giving us heavy rain.  This is is a photo from Tuesday of the great surfing at Nauset.